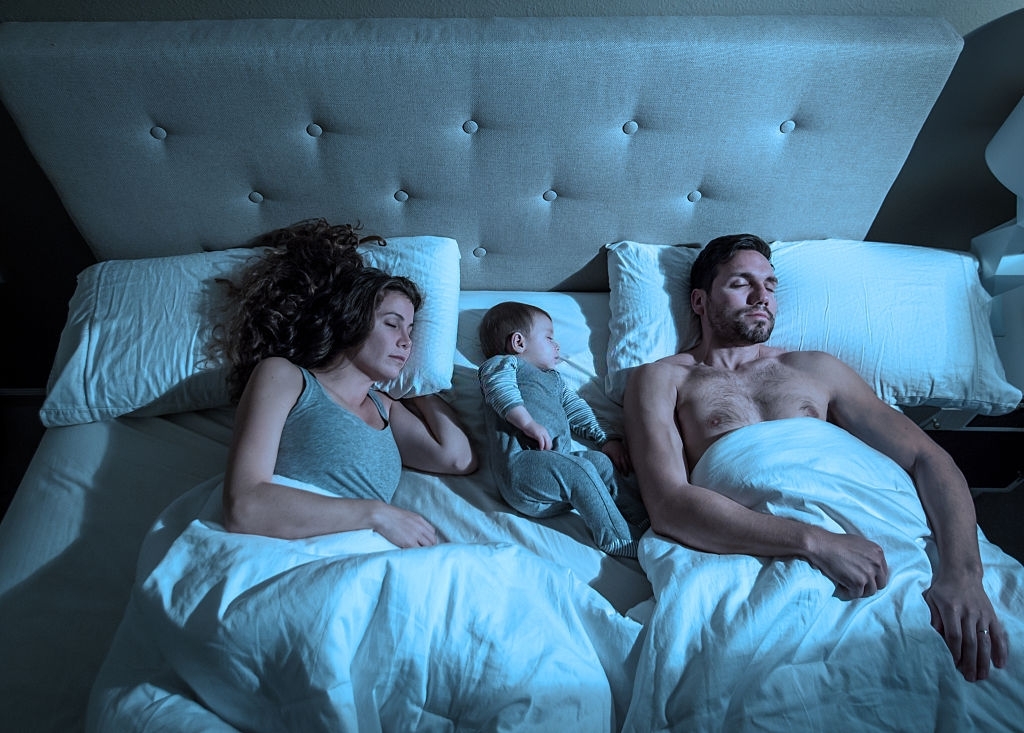 Editor’s note: This Co-Sleeper Safety post was written by MamaUndone, who goes by the same name on Babyhuddle. She blogs at Confessions of a Stay at home Mum and welcomes you to the often inane ramblings and questionable sanity of a 30-something(ouch), semi-crunchy mum of three and a glimpse into her life as a party of five. They’re noisy, grumpy, sarcastic, boisterous, heathen and, if only to each other, loveable.

“At some point in the night, a small sigh punctuates the darkness as her perfect hands knead and fetter upon my spine. I shift feeling her warmth, a jig-saw perfect fit as she completes me. Turning towards her, nimble fingers grab and need against me until she finds her bounty and settles into the slow rhythmic suckle of a midnight snack. Her perfection is like pure sunshine glittering onto the night. I love her. I tell her so. I tell her again in tender whispers. She murmurs back. She loves me too.

I still love her two hours later, and two hours after that. I just don’t like her as much those times.

I lay adrift in the night with only the digital display of the alarm clock for light as it mocks the passing of my life minute by minute. I fade into the lullaby of her breaths and wait for sleep or morning, whichever claims me first.
I should miss The Husband in my bed but I think I’d miss The Baby more. He shall share my bed until we’re creaking and old until we sleep and do not wake and she shall share my bed until she sleeps through the night finally or drives me utterly insane, whichever comes first.” – – –

Taken from  In the still of the night.

I’m tired. Bone tired.  Hell, let’s go one better, I’m soul tired.  Yet I could be more tired (yes, I made that word up).  Yes, The Toddler doesn’t sleep through at 29 months.  Yes, he still breastfeeds 24/7.  Yes, he’s still sleeping in my room, and golly gosh, even at times in my bed.  Truth be told he’s always slept with me.  It just works.  He wakes and demands feeding, I roll over flop a boob in his general direction (yes flop, I know, forgive me for getting terribly technical) with my eyes still mostly closed whilst he fills his boots than with any luck rolls back over and goes to bloody sleep.  I could be getting out of bed all cold and wobbly from lack of sleep and stumble out of the room whilst he gets increasingly agitated and across the landing to settle him in another room, but evidently, these huge metal rods I’ve made for my own back make it too hard to stand and walk…no wait….they allow me to stay nice and warm and snuggly in bed and save The Toddler getting unnecessarily upset.

But co-sleeping is like, dangerous! Babies can you know, die.

After all, that’s what the tabloids tell us, so it must be true.  Even medical professionals are scared of mongering and demonising an act that is actually biologically appropriate and when done safely can half the instances of SIDS.  They don’t tell you that bit though.  It also plays a rather significant role in successful and extended breastfeeding, something that becomes terribly easier once you’ve learnt to do it lying down.

There are different kinds of co-sleeping however and yet they lump them all together under a big ‘Don’t do it!’ sign.  The thing is though, people are going to do it regardless.  Many of them will do it without actually knowing that’s what they’re doing as they are too busy trying not to do it.  I’ve lost you there, haven’t I?

Stay with me, let me explain.  It’s the days of a newborn, who like a newborn should, wakes constantly and feeds a lot, cluster feeds.  Somewhere in mum’s mind, she thinks how much easier it would be if she didn’t have to get out of bed and get the baby out of their cot to settle them but it stays in the back of her mind because we must not co-sleep.  So she’s tired, close to tears tired, we’ve all been there.  Baby is crying, it feels like that’s all they do, constantly.  As soon as you put them back down, their  ‘I’m not attached to mummy’ radar goes off and with it their siren-like wail.  So you sit in a chair with them or lie on the sofa with them whilst they sleep and inevitably nod off with them.  It’s okay though, it’s not a bed so you’re being good and not co-sleeping.  Only that is co-sleeping the only difference is if they were in a bed it would be infinitely safer.

Trying to discourage all co-sleeping practises because of co-sleeping mal-practises is like banning babies from travelling in cars because once a parent somewhere got drunk, didn’t strap baby in a car seat and went for a drive.  Really, it’s that ridiculous.

There are some really simple rules for co-sleeper safety

5)      Don’t co-sleep if you are taking prescription drugs that make you drowsy or desensitise you.

The fact is, parents are going to co-sleep in one form or another at some point whether they mean to or even realise it’s what they’re doing yet sadly because of the demonization of it, not all of them will do it safely.  That’s when we get the headlines of baby deaths ‘caused’ by co-sleeping. Note the ‘co-sleeping’, not bed-sharing.  Bed sharing is a type of co-sleeping.  Often if you look deeper into the headlines you’ll find they weren’t in a bed or the parent was inebriated or a smoker.

Surely if it’s going to happen any way we should work harder on educating on how to do it safely rather than scaremongering?  Knowledge is power.  Knowledge is safety.

But Nah, because that would surely turn us all into raving hippies who weave our own knickers from lentils and underarm hair.

In countries like Japan where co-sleeping and breastfeeding are the cultural norms (and the lack of maternal smoking) SIDS rates are one of the lowest in the world.  Other countries that practise ecological nurturing don’t even have a word for SIDS as the instances of it are that low.

I could be an awful blog bore and not only stand on my little tie-dyed soapbox but could also dance on it too and dazzle you with the science like how co-sleeping actually stimulates babies to own breathing patterns and heart functions and regale you with all the benefits on physical, emotional and mental health for baby and parent.  I trust you though, we all know how to google-fu and just in case you’re sat there on a caffeine drip with a screaming baby playing nipple cripple on your tits I’ll even share a few links that make interesting reading:

Granted co-sleeping isn’t for everyone, yet you can co-sleep without bed-sharing. Even simply room-sharing has benefits and you can buy sidecar style cots, whatever floats your boat. That’s Co-sleeper safety for you!

But what about the nooooookie?  Firstly, you’re having sex? Just so we’re clear, I actually quite liked you up until now.  Seriously though, be creative….you have a whole home, use it. .

For what it’s worth Thing Two shared my room from birth until around 3.5 years and the transition into her own room? Effortless and absolutely painless.  Damn, where’s that rod gone?

Oh look, it’s nearly nap time.  The Toddler and I are going to snuggle up together in bed and sleep. Catch you on the flip side.

Hope this article on Co-sleeper safety was useful 🙂