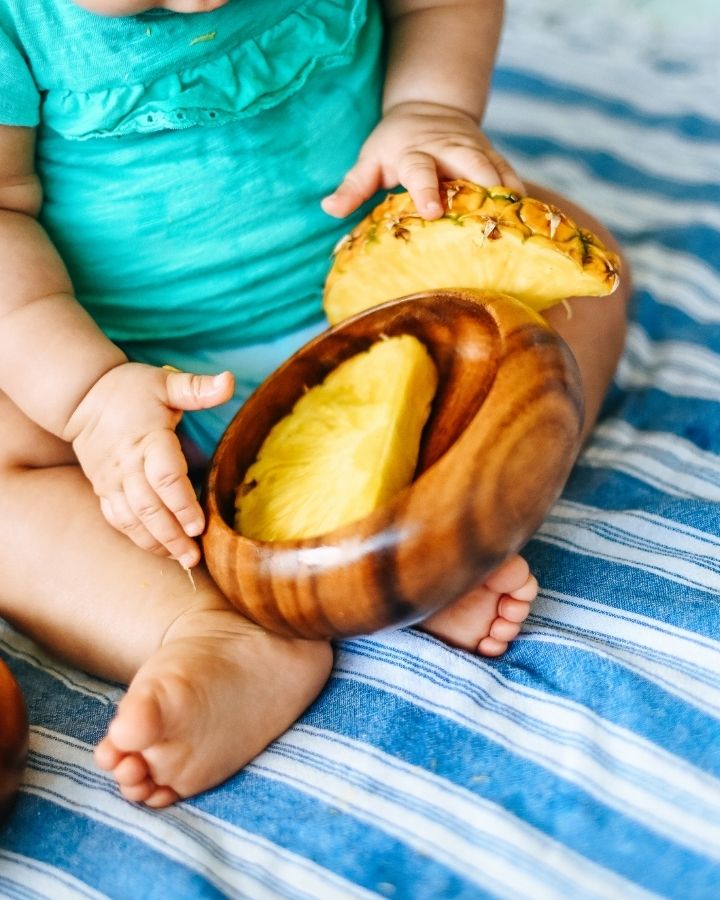 Can I give pineapple for babies?As they acclimatise to eating with a spoon, your baby is starting to explore largely pureed meals at six months old. Pineapple is a wonderful fruit to puree because it has a distinct flavour and thick texture.

If you don’t want to spend the money on a full pineapple, you can start with a can. Just make sure to read the label to see if there is any added sugar. Adding sugar to your toddler’s diet should be avoided until he or she is at least two years old, according to doctors.

Continue to provide pineapple to your kid on a regular basis if he or she doesn’t like it at first. It may take a few attempts to get your baby to eat a new food before he or she accepts it.It is a good source of Vitamin C.

Pineapple can be introduced as soon as your baby is ready to start solids (usually around 6 months), as long as it is finely chopped or sliced into thin strips. It is important to note that pineapple is acidic, which can cause or worsen diaper rash.

THE DISCOVERY OF PINEAPPLE

In 1493, explorer Christopher Columbus found pineapples on Guadeloupe Island in the Caribbean. The fruit is also native to southern Brazil and Paraguay.

American colonists regarded pineapples as a luxurious treat because of their rarity and cost.

THE ANATOMY OF PINEAPPLE

A pineapple is the result of many flowers whose fruitlets have joined around the core.PINEAPPLE NUTRITION

Pineapples contain bromelain, an enzyme that may help arthritis pain by reducing inflammation. They are also a good source of vitamin C, which helps strengthen your immune system.

Pass over sour-smelling or bruised pineapples. Fruit from Hawaii or Central America tends to be freshest.

To make your pineapple for babies softer and juicier, keep it at room temperature for one or two days before cutting.

Pineapple’s acidic sweetness complements shellfish and white fish, as well as robust fruits like avocado and banana. It also pairs well with strong-flavored fruits such as grapefruit, raspberry, strawberry, and tamarind, as well as fatty, nutty flavours such as coconut and macadamia nut. For a richer flavour, try combining fresh herbs (cilantro or mint) and spices (cinnamon or cayenne pepper).

Is Pineapple Good for Babies?

Pineapple can be a tasty addition to a baby’s diet as it grows. At the same time, parents should avoid offering citrus and acidic fruits to children under the age of one. They must be cooked safely, and only one new food should be introduced to the baby at a time. Food introduction must be closely watched in order to detect allergic reactions. In addition, citric acid can upset the baby’s stomach, particularly if he suffers reflux.

Pineapple, despite its nutritional value, should be introduced with caution, as it may be difficult for your child’s digestive system to handle. Though pineapple is not known to be an allergen, baby food made with it is acidic, which might cause issues for babies. Because the skin around the baby’s mouth is so delicate, the acids in pineapple may cause rashes. Pineapples have also been linked to a bad case of diaper rash. As a result, pineapple should be introduced gradually, mashed with other foods, and only after the baby has reached the age of six months. Pineapple wedges or chunks are not recommended since they are fibrous and could cause choking.

Why is pineapple not good for babies?

Pineapple, despite its nutritional value, should be introduced with caution, as it may be difficult for your child’s digestive system to handle.

Is pineapple puree good for babies?

It is a good source of Vitamin C.which helps strengthen your immune system.

How do you give a baby pineapple?

Pineapple can be introduced as soon as your baby is ready to start solids (usually around 6 months), as long as it is finely chopped or sliced into thin strips.

Does pineapple cause diaper rash?

It is important to note that pineapple is acidic, which can cause or worsen diaper rash.