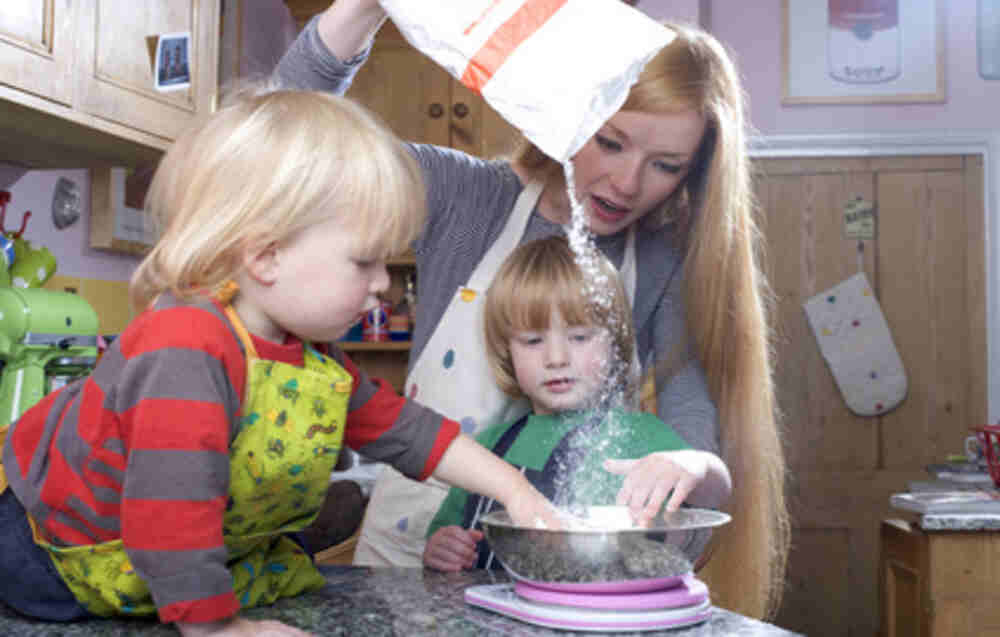 When I was pregnant with Millie, one of the things that worried me most about having two children was how would I managed to keep them both entertained at once! Chester would be 3 and a half by the time Millie was born and he is very much the sort of child that needs to be occupied at all times! Please don’t get me wrong, we had planned the two Children but it had never occurred to me until I was actually pregnant that not only would I have to keep more than one child entertained, but also keep them both interested in what we were doing, even though there would be a 3 and half year age gap between them!When Millie was newborn to 6 months I used to involve her by sitting her in her bouncer chair next to what we were doing, if we were baking she was there in her Chair.

if we were doing jigsaw puzzles she was there in her chair and if we were playing Ben 10? Yep you guessed it she was there in her chair (or on her playmat!). I used to constantly be talking and showing her what was going on, asking Chester to explain things too. On the flip side, I also had to keep Chester entertained when I needed to change or feed Millie. I did this by simply letting him help. He loved it because he felt very grown up.Then came the stage when Millie started to crawl 6 to 12 months. I panic’d lots about this stage as I remember crawling very well with Chester and I am not ashamed to say it is not my favorite stage! This stage was a little more tricky, as Millie was, and still is attracted to anything she is not supposed to have or touch. Chester finds this hilarious so spends lots of time encouraging her to do those things! Things we now do together include dancing, playing shops, jigsaw puzzles and reading books. There are certain things that I do with Chester when Millie is having a nap such as baking and arts and crafts but actually at the moment I think it is nice for Chester to do something one on one with me so this works pretty well. The down side to all of this is my housework has suffered big time! When Chester was a baby nap times were for housework, but now housework does not really fit into our daytime schedule, I suspect this will be the case for a few years yet!Now, just over one year on from my worries I can say that I survived the first year with only a few tantrums along the way! It was a lot less stressful than I thought it would be and everyone seems to be happy. Chester loves to be the one who teaches Millie how to play and Millie loves to be the one who follows her big brother everywhere even if she does knock down his line of Moshi Monster’s in the process!

Looking back, it was not as hard as I first imagined. In fact the times we are at home are the easiest, its when we go out to local Sure Start Centres and soft play centres that I find it a bit more of a struggle! Millie is starting to have more of an attention span, meaning that she can really play a bit more now. Chester is a lot more chilled out about having to share Mummy (and toys) than I thought he would be. In fact I am actually shocked at how much he has changed since Millie came along. I think what I have proved to myself here is that Children adapt to change a lot better than I thought. Yes there were times that I felt a little guilty that Millie was having to play the part of a Ben 10 alien (yet again) but when I look at both Chester and Millie and how much they love each other I think to myself Yeah, I did an OK job didn’t I?!Something I have also learnt along the way is not to look to far into the future or wish the time away. Children grow up so quickly, so a day spent playing shops or stacking blocks and knocking them down is not a day wasted. Its a day of making memories and watching your children grow. Its the little things in life that children remember the most, Chester is always reminiscing about the time last summer that we put the play mat in the garden so that he could show Millie how he was going to win the Olympics, then I made him a gold medal that he wore for days, he was so proud of himself! Take each day as it comes and if something does not go to plan, just laugh it off and start again! I have had many days that have not gone to plan (these normally involve paint on the floor or playdoh in the mouth) but these day’s seem to be the ones that make me smile the most!