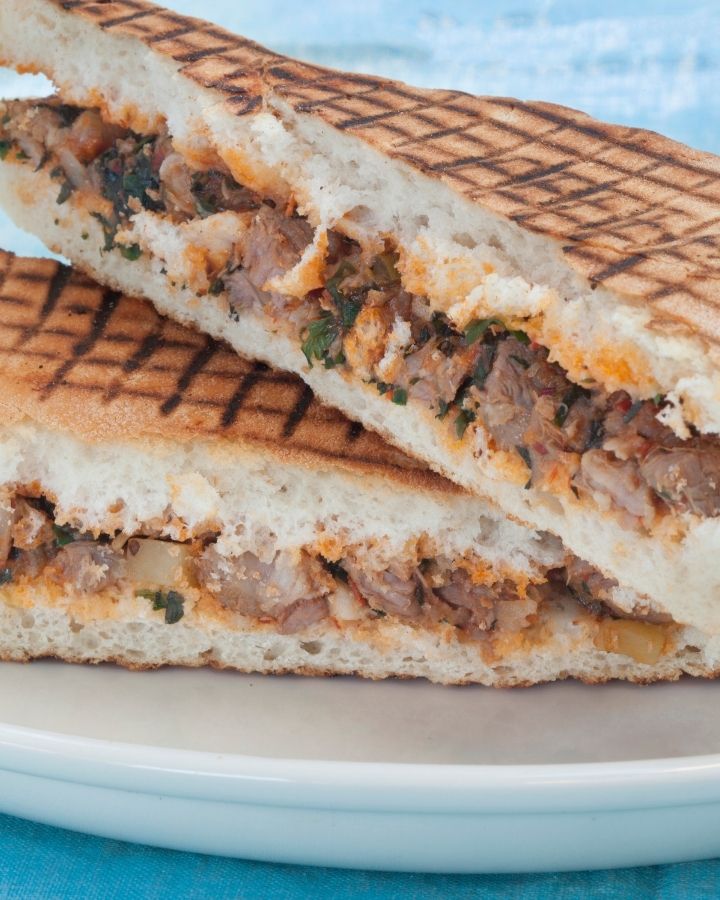 Learn how to make this baby food recipes. This Easy Cheese Steak is recommended for babies 12 months of age and up. If you are unsure whether or not your baby is ready for this cheese steak recipe, consult with your child’s primary care provider.

This recipe is recommended for babies 12 months of age and up. If you are unsure whether or not your baby is ready for this cheese steak recipe, consult with your child’s primary care provider.

This recipe is a simple take on the classic Philly Cheesesteak. I made this for my son tonight in under 10 minutes, and he ate up every bit of it! This simple and easy recipe is sure to become a favorite!

1930s – During the 1930s in the Italian immigrant section of South Philadelphia, brothers Harry Olivieri (1916-2006) and Pat Olivieri sold hot dogs and sandwiches. Tired of hot dogs, Pat suggested that Harry go to a store and buy some beef. Harry brought it back, sliced it up and grilled the beef with some onions.

The brothers piled the meat on rolls and were about to dig in when a cab driver arrived for lunch, smelled the meat and onions and demanded one of the sandwiches. Pat never got a bite because a cab driver drove by, smelled the sandwich, and asked how much? He didn’t know what to charge, so he charged a nickel. The cab driver supposedly said,  “Hey . . . forget about those hot dogs, you should sell these.” It was not until 20 years later that cheese was added to the sandwich by a longtime employee, Joe Lorenzo, who was tired of the usual sandwich and added some cheese.

1940s -In 1940, the brothers opened Pat’s King of Steaks at 1237 East Passyunk Avenue. The business has been there ever since, open 24 hours a day. Cheez Whiz was added to the steak and onions starting in the 1960s, and provolone, American cheese and pizza sauce later became options in the concoction along with various condiments, and side dishes.

1970 – In 1970, Pat Olivieri quit for southern California. A dispute over ownership broke out with Pat’s lawyer son Herbert on one side and Harry and his children, Frankie and Maria, on the other. In 1974 Pat died, and later Frankie bought the business out.

Residents and tourists who come for paper-wrapped Philly cheese steaks and sodas can study the wall of celebrity photos before taking seats at the no-frills picnic tables. For the uninitiated, a sign explains the drill: with or without onions; specify provolone, American or Cheez Whiz; have your money ready; go to the back of the line if you make a mistake.

A cheese steak sandwich is not really a steak at all – it is a sandwich made with chipped steak, steak that has been frozen and sliced really thin) and cooked on a grill top. The Philadelphia cheese steak is truly one of the most delightful and beloved foods available in Philadelphia, Pennsylvania. It is said by most Philadelphians that if a restaurant offers something called a “Philly Cheese Steak” then it’s not authentic.

Locals think in terms of steak sandwiches with or without cheese. Without cheese, the sandwich is referred to as a “steak.” With cheese, it is a “cheese steak” or “cheese steak.” Cheeze Whiz is the topping of choice for serious steak connoisseurs. However, you can also use provolone cheese.