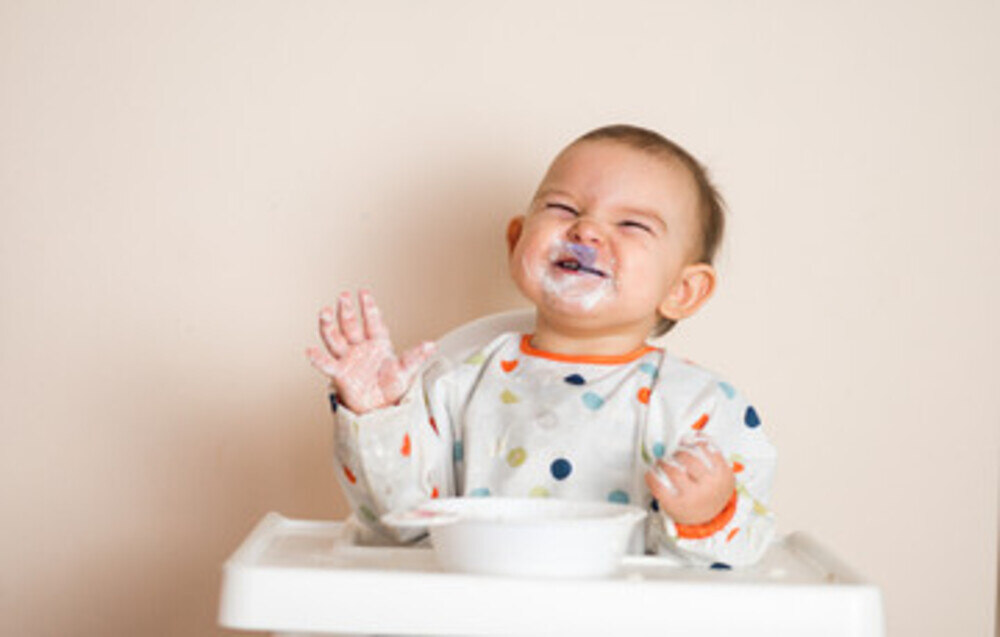 I first heard about Baby Led Weaning (BLW) at my local Breast Feeding Support Group at Pinner Wood Children’s Centre (a wonderful place). We (my son Drew and I) used to go along every week in his early months for support and guidance on breastfeeding. One Friday morning the ladies running the group were discussing a ‘new’ way of introducing solids to your baby; something called Baby Led Weaning, a revolution in baby feeding! They mentioned how you don’t give your baby any pureed food, but just the food you and your family are eating. No spoon feeding, no boiling up veg and blitzing in the food processor; just pure, solid pieces of food.  It sounded intriguing, but at the time it was a million miles away for Drew and me, as we were still getting to grips with breast feeding. But I noted the name and didn’t think anymore of it, until it was time.

When Drew and all his baby friends were coming up to 5½ / 6 months – the time to start solids – all the mums were starting to discuss ‘solids’ and what tools they needed for weaning : high chairs, Baby cook steamers, bibs, blenders, and butternut squash puree recipes. I had no idea what was expected as this was all new to me, with Drew being my first child and many of my old mates having had babies many years before me, so went along with the chat. When Drew hit 6 months we started with a few puréed meals: baby rice to start, which he hated, and a little puréed pear and apple to vary the bland taste of the rice and some mashed sweet potato. It really felt uncomfortable imposing this boring slush on him and he hated me putting a spoon to his mouth, wanting to take it from me to use himself. (Very independent is our Drew, and “very advanced�? as his Grandma is always saying!). Then I remembered the discussion I had had many months back at the Breast Feeding Support Group regarding Baby Led Weaning. To learn more I went on the internet and searched ‘Baby Led Weaning’,. Armed with the basics, I got started with a few little meals for Drew to try: broccoli florets, green beans, mini rice cakes, etc.

I was very apprehensive at first as those around me hadn’t heard of this new way of feeding. Although I had done some research and understood the theory, I still felt there should be more to learn. Then I found Gill Rapleys book ‘Baby-Led Weaning :Helping your baby to love good food’. This was a godsend since it’s very easy to read and reassures apprehensive mothers on how to get started. The book explains the reasoning behind Baby Led Weaning and that was enough for Drew and me. We continued as we had started with different fist size foods; nice easy manageable pieces for him to play with and chew. Babies like to explore, feel and put things in their mouths and Drew is no different. These were new things for him to discover and enjoy. At first it was a mess and a lot got squidged and splattered, but within days he loved what he was eating. Play is the key focus with how we’ve handled this approach to feeding. Many mums worry that they are not getting enough food inside their babies in the beginning: they fear too much food is getting dropped and not enough is getting in their mouths. I too was concerned at first, but was reassured by our wonderful Health Visitor, along with Gill Rapley’s book, who told me that during these early stages breast milk is still the key source of nutrition for the child. For the first weeks or so food was an exciting new toy for Drew, but in time he started to pop more into his mouth and less on the wipe mat. You soon notice how much is getting eaten when the contents of their nappies start to change!!  By 8 months he had switched his hunger desires from milk to food, and had slowly started to drop his milk feeds for solids, recognising food was his new source of nourishment.

It hasn’t all been easy. We did have days where most of the food was pushed around the table. And there was the ‘drop everything on the floor to wind Mummy up’ phase.  I also learnt not to give Drew too much at one time. Too much food in front of a baby seems to panic them, not knowing what to go for first. They are like us, too much on your plate and you don’t know where to start.  Luckily Drew seems to like most foods. He is now 2 ½ and like any toddler he has his ‘I don’t want that for tea, I want this for tea…toast’ days. But I find it only lasts a few meal times and I go along with it. He loves fruit and veg so I’m not worried that he hasn’t a balanced diet. He loves the social aspect of everyone eating together, and he can be a real show off. Like anyone he’ll go through phases of loving something like strawberries for a few weeks and then he’ll move onto something else. Marmite is his fav; I think he would have it on everything. He has his father to thank for this obsession.
The most important things we have learned are: to be patient as experimenting with BLW takes time and some mess is inevitable; and to enjoy the time spent together – its fun eating as a family, and they learn from us. They watch how we eat and then copy. Sometimes I would wish Drew would watch me more than his father!  And most importantly, it’s a great way of introducing your child to think for themselves, and become independent. Drew learnt so much with BLW. He loved feeding himself and if I ever went near him with a spoon he’d quickly takes it from me. He was able to hold and eat a whole peach without dropping it at an early age and he was great at picking up peas with his little fingers and popping them in his mouth. These skills transferred to his play time; he was great at picking up the smallest of things off the carpet and handing to me, normally in front of guests, showing how clean my house really wasn’t!

BLW was fun for us all as a family. It was a point of interest for many when we are out, and we have all learnt so much. I would recommend this route to any parent with a child coming up to the 6 months. Some of my friends at the time stuck to the puree way and it has worked for a few, but many are finding that their little ones are now having issues with lumps/finger foods. A few of them are also on their second babies and have come to me for help so they don’t have the nightmare they had the first time round. BLW is daunting at first, but if you follow the basics it can be very rewarding, for both the child and the parent. I have just started BLW Quinn, just a few days ago and he seems to be enjoying this new adventure at meal times. If you like to know more please follow me at www.itsyummymummy.com where I will be blogging about his every move, plus new recipes.