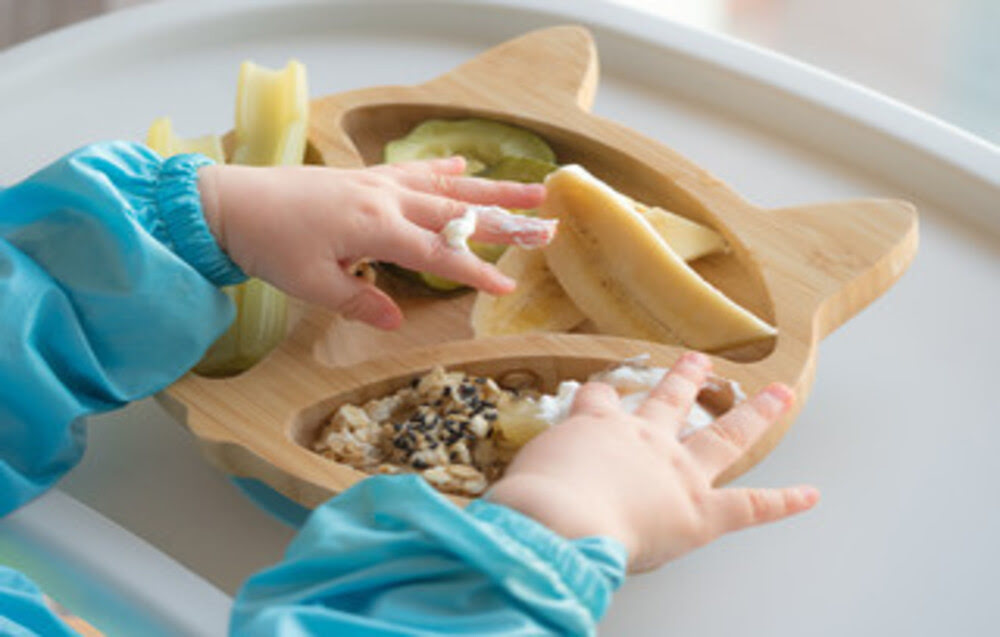 Well, crack open the bubbly, baby is nearly six months – it’s time to start weaning. How do you feel? Excited? Overwhelmed? Relax – introducing baby to the wonderful world of food is often a satisfying and hilarious experience.

The official advice is to hold off weaning until after six months, as starting too early can cause digestive problems and allergies. That said, most mothers I know start a little earlier. I started Alice just after five months and it certainly worked for me. It took her a week to get into it, but it was never a battle, as I knew I had plenty of time .

Maria decided to wean William when he was just 18 weeks, as he was showing all the signs he was ready. “He’d been draining bottles, wanting more, and was very interested in our food. I started with baby rice and he took it straight away. He didn’t turn away or refuse it.”

Maria followed all the standard advice, starting with baby rice, and alternating with carrot for the first week, introducing each new food for two days in a row to test for allergic reactions (some doctors recommend sticking to each new food for around a week).

What food should you give? Most mothers start off on baby rice and pureed fruits and vegetables, moving onto pureed/mashed meat, fish (watch for bones!) and dairy after six months. Finger foods (rice crackers, cubes of cheese, pasta) are generally introduced around 9 months.

You may find that your baby spits it out, shakes his head or turns away. Fine. Take the food away and try again next mealtime. Any good baby book will tell you not to force it. Remember: the biggest gift you can give your child is a healthy, balanced, relaxed attitude towards food. The same goes for mess. If you can’t stand the thought of pureed courgette all over your pristine cream carpet, arrange mealtimes in the kitchen, or put some plastic under the high chair. But the best advice is to try and turn a blind eye. Your baby will make a mess, and attempting to change that will only end up with screaming and tears, mostly your own. (Your baby will more likely take the only sensible response – smile gorgeously and dunk some banana on your nose).

Mummy’s a domestic goddess – most of the time!

When I started weaning Alice , it was like being catapulted back to the 1950’s. There I was, blender in hand, pinny on, Annabel Karmel book by my side cooking up batches Jamie Oliver would be proud of – spaghetti Bolognese, cauliflower cheese and vegetable risotto – to be later frozen in ice cubes.

Of course, not all of us have time to start a baby food empire. In that case, thank heavens for baby foods, mainly for those Just In Case/ Can’t Be A**** moments (we Mummies do deserve A Life, after all). For one thing, you may be like Lorraine who spent all morning slaving over haddock and cheese sauce especially for Baby Matthew, only to find, once offered it, he spat it out, pushed away the spoon and threw the rest on the floor.

“I’ll feed myself, thank you!

When should you introduce the spoon? I did almost straight away: one for myself to feed her with, and another for her to experiment, and by 12 months she was confidently spoon-feeding herself. As always, Baby will do it when they’re ready and not a moment before!

At first, you may be so overwhelmed with the constant round of pureeing and meal-planning, you find it hard to see the bigger picture. When I first started, the health visitor told me that by 12 months, Alice should be eating family meals with us (chopped up, that is). This helped me see where I was going, and now at 15 months, she happily munches her way through whatever we are eating, barring alcohol, salty or processed foods, of course!